New York City and the Strange Phenomenon of Time

Out of my little hovel, my semi-personal bubble in which I live, I marvel at time. Visiting NYC as I approach 50, in this particular era of history, forces me to reflect on this strange concept of time. I found this definition of time on Google (with no reference)

Time: the indefinite continued progress of existence and events in the past, present, and future regarded as a whole.

This is the time to which I refer. On this journey through NYC, we have experienced and studied the broadest application of the definition. At the Intrepid landmark, the Space Shuttle Exhibit had a special section on the Hubble Telescope. Glossy, high resolution pictures taken by this giant sky camera showed me stars that scientists say are from the beginning of time. I, this nano dot on Earth in 2015, viewed something from when the Universe was created! Time is both long and fast. 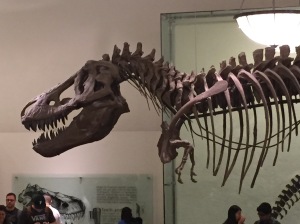 At the NY Museum of Natural History, I studied ancient bones of creatures that dominated the Earth over 4 billion years longer than humankind has been alive. And, yet, with very few exceptions (such as an alligator) they are extinct. No blood courses though those veins, no teeth tear at limbs or flesh. Yes, in our time (I hesitate to say modern time since any current time is modern) and with our scientific and technological advances, scientist are able to extract DNA from some carefully preserved fossils to learn in what way these creatures are like us. How different are we from the first “humans”?