(This was written before the outcome of the Presidential election.)

Today, I voted. See that picture of me? They don’t just give those stickers out to anyone. (Well, in fairness, it would be quite easy to swipe one if I just wanted to impress you.) 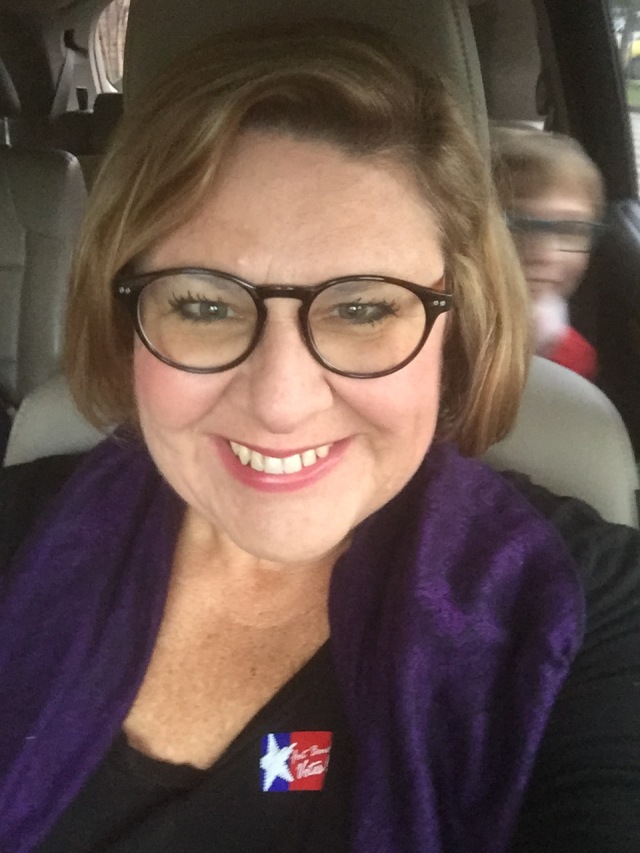 So, I checked in with myself, and the dialogue went like this:

Me: So, Self, how are you feeling about voting in this election?

Self: Thanks for asking. I actually feel many emotions all at once. I am proud that I voted because as busy as I have been, I could easily have forgotten. I mean, last week I forgot to take my morning medicine three times, forgot to sign a field trip form four days in a row, and even forgot my bra one day. (Thankfully, I spent that day at home.) So, I feel pat-me-on-the-back pride for remembering to vote.

Me: Yep. I’ll agree you are busy, but really how much credit can you take when the entire city is littered with campaign posters?

Self: Hey, don’t judge me, Me, or I will retreat to that pit in the bottom of my/your stomach.

Me: Okay, no judgment. What else did you feel?

Me: I couldn’t agree more, but you do realize that even if the election is settled this evening, not one of those issues magically vanishes?

Self: *Sigh* I know. I just wanted the illusion of sanity for just 24 hours. Which leads me to my next emotion, hopelessness.

Me: Now, now. Don’t go there. You are an intelligent, innovative woman capable of making change. Don’t use the big H word.

Self: I can’t help it. The United States’ political system is beautiful in theory—three branches, checks and balances, constitutional rights and all. Great stuff those forefathers came up with. However, when I was in graduate school, I learned a great deal about how politics really work, about how hard it is to pass a bill, and even if a person’s initial intentions were pure (e.g., health care for everyone, not just the rich; higher standards for education), the actual bill looks nothing like what it was intended to be. Special interests attach themselves as provisions for, say, a new highway in Pennsylvania or money allotted for research on the ant population in New Mexico. In what way are these actions connected to, say, employing more teachers?

Me: I know, but that is part of the game.

Self: Well, it shouldn’t be a game. Lousy metaphor. Lobbyists should not have so much influence, Congress “lifers” should not die in the Senate chamber, and no elected official should be allowed to abstain from a vote. And, can we get rid of that term “lame duck”? Really, the president of the free world should not be likened to waterfowl, and a disabled one at that. Pretty sure that is not PC anymore.

Me: Yeah, that is a bit disrespectful.

Self: And, no one with any sense agrees that the Electoral College is the most fair and accurate way to vote, but no one will change it. Same old, same old. I feel hopeless because the legislative and political system needs some serious overall, but no one has the guts to change it.

Me: But, you have to admit, it is hard to make such systemic changes, especially when people can’t seem to agree on basic constitutional rights.

Self: See what I mean? Hopeless.

Me: Yeah, I see, but I’m a glass-half-full kinda girl who wants to believe that Americans of all people can make changes for the better in a thoughtful, civil manner.

Self: Girl, take off them rosy glasses. I don’t know what generation we are—Gen X, Y or Z—but my generation is disillusioned. How can anyone compromise when no one respects a differing opinion? How can officials make changes when they can’t stand the sight of each other because one called the other a name, or bent the truth or distorted facts in order to get elected? Would you want to give in or work with someone who did that to you? I wouldn’t. It’s just ugly.

Me: Let me get this straight. You think political races are ugly and no better than expensive platforms to spout hate and lies.

Self: Yep. This election could have been so different. It could have been quite exciting because we had Donald Trump—a political outsider like the proverbial Mr. Smith with a larger bank account—willing to head to Washington to change the status quo of what politics as usual looked like. And, we had the first female presidential nominee—someone extremely knowledgeable about domestic and foreign affairs who also happened to have lived in the White House once. Something new on both sides. Yet, both candidates took the path most taken, the path of pathetic political “strategery,” name calling, scare tactics, and flat out lies. And, just to add a bit more drama, Russia inserted itself in the campaign and the FBI was dragged and dragged again into the story. The writer’s of Saturday Night Live had so much material to spoof, I’m sure they could have put out a skit every 12 hours. And, all of that is just…

Me: But, look at it this way, it’s almost over.

Self: It’ll be over, but just as a hurricane passes over land and water, this political campaign more than most will leave behind a great deal of damage both personally and nationally. For the sake of the country, I hope that the parties and the people as a whole become struck with selective amnesia so they can forget about the name-calling, the lies, and the malice. After all, they have a job to do. An important job.

Me: *Sigh* Yep. Still feeling that sense of pride?