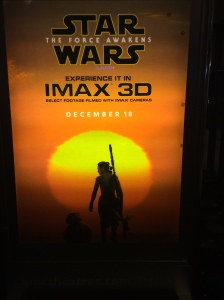 That’s right, I was one of the millions of moviegoers who braved the crowds to see the seventh installment of the Star Wars movies. My husband and son had been anticipating this day for months. They watched trailers, debated possible plot lines, and seemed to develop their own shorthand language for the movie. They were pumped to go. My second child Katie, likewise, caught the Star Wars fever, begging to go on opening day. To be honest, the only reason I went was because my husband proposed it as a family event. And why not? The kids were out of school for the holidays, my shopping was done, and my dirty floors and laundry would live to see another day.

It wasn’t that I don’t like Star Wars. I am proud to say I saw the original franchise in an actual movie theater. (This always impresses my son’s friends: “You DID?” they say in awe.) I mistakenly believed that the whole Star Wars thing had passed me by. My kids watch some cartoon version of it, and it looks nothing like the world of droids and hairy Chewbacas I remembered. And, to be honest, the prequel Star Wars series—although well written–wasn’t as thrilling for me. (It might be because there was no Han Solo—heavy sigh!)

So, I agreed to go, and while my husband and kids waited in the long lines, I stayed back saying something about dirty dishes (my family tend to go brain dead at the mention of dishes). In that time, I feverishly hit Google. Like a panicked high school student who hadn’t read the assigned novel and had 12 hours before the big test, I searched the Internet for the equivalent of Cliff Notes for the last three (or would it be the first three?) Star War movie plots. (Don’t judge me! It had been decades.)

Armed with my refreshed knowledge, I texted my husband that I was on my way. Long lines of waiting fans snaked around the inside of the theater anticipating the moment they could rush to their favorite viewing spot. But, when I settled in my little theater, I was surprised that it was only half full. I later realized that is because AMC had a Star Wars movie starting almost every 15 minutes. I am not even sure they were showing other films that day. Once we got through 45 minutes of previews—90 percent of which were about other war movies—the lights dimmed, and the yellows scrolling text so iconic to Star Wars started rolling.

For the next two hours of so, I sat in utter delight—loving every minute of this Star Wars VII movie. It was true to the original storyline, piqued my interest with new mysterious characters, and featured some of my very favorite characters from days gone by. Although aged (as we all have), Princess Leia and Han Solo were still the same. Solo was his old cocky, self-assured self and Leia was serious and still dedicated to her cause. (Incidentally, Chewbaba, R2D2 and C3PO didn’t age much.) I thoroughly enjoyed it. It stirred in me the old feelings of routing for The Force and hissing at the Dark Side. 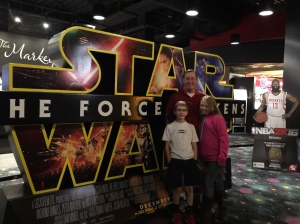 When the movie finally ended, Annie (my daughter who was utterly clueless about the movie and agreed to go for the popcorn and the Icees) expressed interest in watching the original movies. She wanted to see what Princess Leia and Han Solo were like when they were younger. I told her Han Solo and Luke Skywalker were “hot”. She seemed supremely disgusted that I would use that word. I followed after her saying, “What? I was your age when the first movie premiered.” With wide eyes she said, “You were?” Then I told her how I loved the first movie and could not get enough of it, how I decorated my 6th grade journal with Star Wars cards, how I wanted to be tough like Princess Leia and wooed by a sexy smuggler. For a brief moment, there was a spark of understanding in her eyes, like she really believed I was once a preteen just like she is today. In that instant we bridged the chasm of generational misunderstanding and ignorance. Although it was a fragile and tentative bridge, for that moment we connected.

When I walked out of the theater, still basking in the glow of “the Galaxy,” I noticed many fathers and sons, mothers and daughters waiting in line. It dawned on me how very unusual this experience was. Very rarely do generations share a deep passion for something that spans decades. My son Will and my husband Mike will continue to relive their favorite scenes from the movie, usually the ones involving guns and light sabers, but I will forever share the moment when my daughter and I agreed on something—even if it was that the men of Star Wars are hot.

One thought on “Star Wars VII Bridges the Generational Gap”